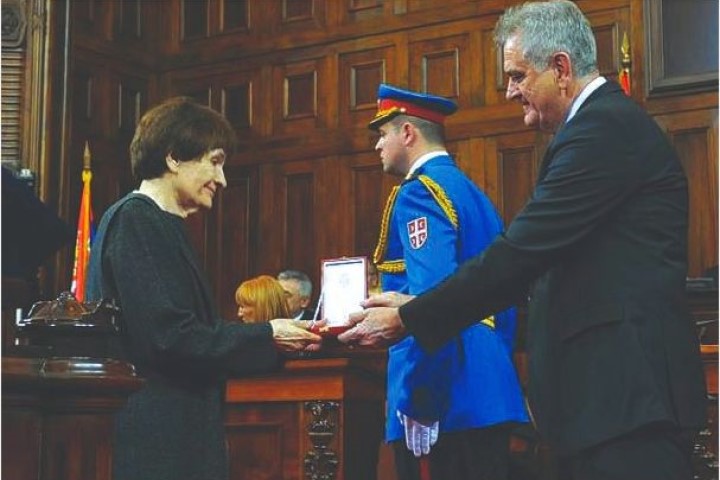 Tal is my Zeus

Such creativity, a love for sacrifice and a fierce, uncompromising style have earned her the nickname “Woman Tal”.

But his connection to Tal goes much deeper than that. A very strong mutual respect and mutual appreciation that amounted to platonic love united them and remained with them throughout their lives.

On this DVD, Dorian Rogozenco, Mihail Marin, Oliver Reeh and Karsten Müller present the 8. World Chess Champion in video course: his overtures, his understanding of chess strategy, his clever endgame game and finally his immortal combinations.

Out of the fifteen world champions, I have met twelve, not to mention the candidates for the world champions. Basically I have met everyone who was a known chess personality in my life. The only world chess champion who was not only the world chess champion but the most wonderful person I have ever met in my life was Mikhail Tal, the lightning bolt of our time.
We met quite young when he made his debut at the Portoroz Interzonal Tournament in 1958, and I played at the Yugoslav Women’s Championship in another nearby town.

Tal played the most beautiful and the most wonderful of chess. He is my chess Zeus. A person like him will not be reborn. Now that he’s gone, everyone admits he was a genius, but in his day everyone contested him. During his lifetime, they greeted his sacrifices with skepticism. Now in Kasparov’s books My great predecessors, after computer analysis, his sacrifices are not considered “semi-correct” as they were in his time, but the human mind could not perceive the truth about Tal … The chess he was playing cannot be learned. He has no followers. You have to be born with it. It is not enough to say that he was a genius. He was out of this world …

Milunka remembers the 1959 Candidates Tournament in Bled where a match was played between Tal and Smyslov: the auditorium and said to me: ‘I did it for you, ma’am!’ ”

Gossip was rife by the time she had an affair with Smyslov, and that Tal had especially enjoyed beating him 2½-1½ in this mini-match, which was their first confrontation to excess. 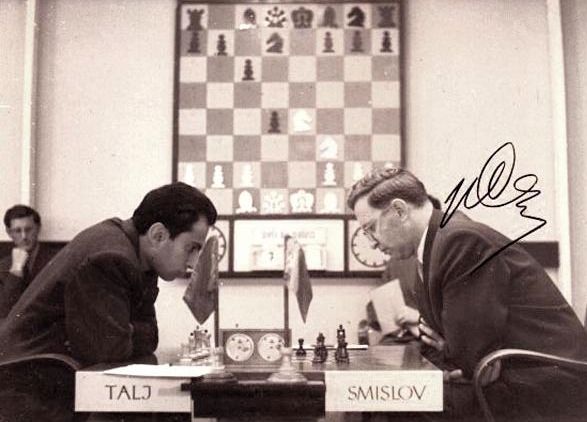 Tal and Smyslov at the candidates’ tournament in Bled, Yugoslavia, 1959 | Photo: chessgames.com

Milunka speaks fondly of Tal’s unusual simplicity and modesty: “He had absolutely no interest in material gain. If I had said to him: ‘Misha, there is a tournament in a small village near Belgrade, we would love if you could attend’, he would have replied: ‘Okay, Milunka’. He did not take anything in his suitcase. He never bought anything. Money to him had no meaning; it was just a burden on him. There has never been and never will be another like him ”.

As Milunka was a star in the Soviet Union, Tal enjoyed incredible popularity in Yugoslavia and especially in Belgrade.

Smyslov cultivated a clear positional style and even in sharp tactical stances he often relied more on his intuition than on the concrete calculation of variation. Let our authors introduce you to the world of Vasily Smyslov.

One day we were walking towards the playroom. The streets were filled with students, people leaned over the balconies to clap and shout his name. There were “orders”: “Misha, sacrifice the tower to Fischer!” Misha, today sacrifices the knight! At one point, a group of students lifted him up and carried him in their arms. I was running behind them, anxious that something might happen to him. People made room for them to pass, the police stopped quietly next to it. But, he was loved everywhere. I was in America at one of its tournaments. People loved him there too. He was a miracle.

Milunka and Tal maintained a close friendship until Misha’s death:

I will always remember Tal’s last days. He had fallen to 30 kilograms. I found a doctor, in fact, a bio-energetician. Nana Alexandria wrote that I convinced her it would help her get by. And he got over it. He came to 40 kilograms. And then an important football game was played. Tal loved football. He went to the stadium against the advice of the doctors … He was unique. He must have burned to enlighten our time. 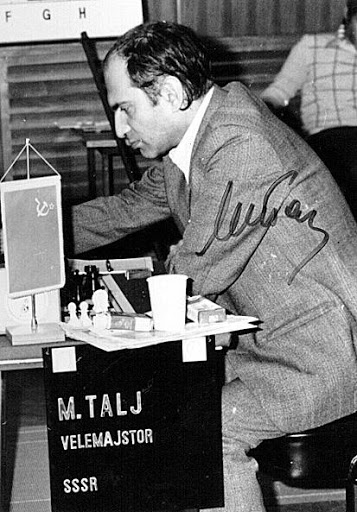 Mikhail Tal at one of the many tournaments he took part in in Yugoslavia; his name and his title ‘grandmaster’ written in Serbo-Croatian | Photo: Sah-mat-lista blog

Milunka also had a meaningful relationship with Kasparov, which however ended on a negative note. At first she was friendly and supported the promising young player. He “bought” it when he once said to her, “If Fisher ever came back to play chess, I would wear the pieces for him.” It was in 1981, during a tournament in Bugojno in Yugoslavia.

But, once he got the title, he started to show an exaggerated sense of superiority. When in 1992, Fisher and Spasky played the renewed match in St Stefan, Montenegro, Kasparov said: “Too big a fund for two retirees”. This, along with his support for the 1992 bombing of Yugoslavia and a number of leftist statements, caused him great aversion to him.

Kasparov not only disappointed me, he personally insulted me by asking to intensify the bombing of Belgrade and to bomb all of Serbia during the war. And I supported him so much. His aunt Riga always says: “We will never forget what you did for our Gary”. When I recently went to Moscow Clara, Kasparov’s mother sent her driver to pick me up from the airport and drive me. She presented her books to me. She remembers, but she cannot influence her son. It does not matter ; despite the fact of what he has done and all this interference on his part in politics, it has to be admitted that the greatest achievements in chess are his. Chess has progressed a lot. But he took everything from his predecessors, and I think if we were looking for perfection, who played the most perfect chess, in the most diverse way among world champions, then it is Kasparov.

She held Anand in high regard, both as a player and as a person. And, after watching a game of the boy Magnus, she said to his father: “Your son will be the future world champion”.

A fighter for better conditions for women’s chess

If the male / female divide in chess still exists today, in Milunka’s time the gap was even greater. She left a lasting mark as a fighter for the recognition and professional conditions of female chess players.

Garry Kasparov’s rise to the top has been meteoric and on his very first attempt he managed to become the world champion, the youngest of all time. In addition to six hours of video, it gives a first-hand account of crucial events in recent chess history, you can improve your understanding of chess and enjoy explanations and commentary from a unique and exceptional personality on and off the board.

She was president of the FIDE Women’s Chess Commission from 1970 to 1978, selected each year with 100% of the vote. Very persuasive, she used her role to bring about many changes: in Skopje 1972, the men’s and women’s Olympics were held for the first time together, and from 1976 they were played simultaneously; women’s matches at the Olympics are played out of three instead of two; the title of Woman Grand Master; Young Women’s World Championship; rating system for women; a gold trophy for the triple female world champion, a silver trophy for the challenger.

At home, she managed to convince the mayor of Belgrade to grant the organization of an international women’s tournament to be held in the Yugoslav capital. The March 8 tournament she organized was started in 1965. It became one of the best and strongest women’s competitions after the Candidates Tournament and, after Hastings and Wijk aan Zee, the longest competition in the world. . He brought the greatest players in the world to Belgrade.

All the chess players dreamed of coming to play in this tournament. It has become a meeting place for the world’s elite in women’s chess. 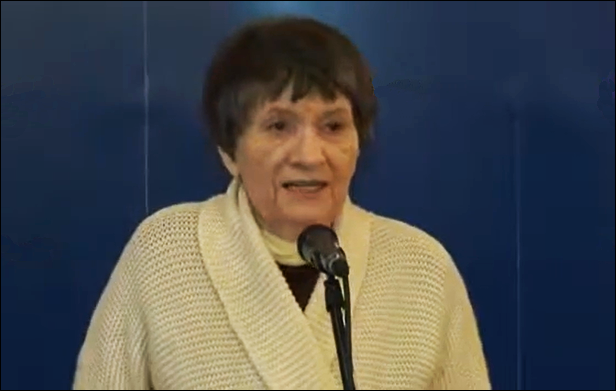 Milunka spoke to the public at the Opening of the 50th edition of the 2018 super women’s tournament, just a few months before her death | YouTube screenshot

She has organized other important events including the Women’s Olympics in Split (Yugoslavia) 1963, Oberhausen (West Germany) 1966 and Medellin (Colombia) 1974, the Korchnoi – Spassky match in Belgrade 1977 and the international super tournament. grandmasters in Niksic (Yugoslavia) 1983. This tournament was organized on the occasion of the 60th birthday of another Yugoslav chess legend, Svetozar Gligoric, and it brought together a number of elite players from all over the world, including Petrosian, Tal, Fischer, Spassky, Kasparov, Timman, Miles and Ljubojevic. 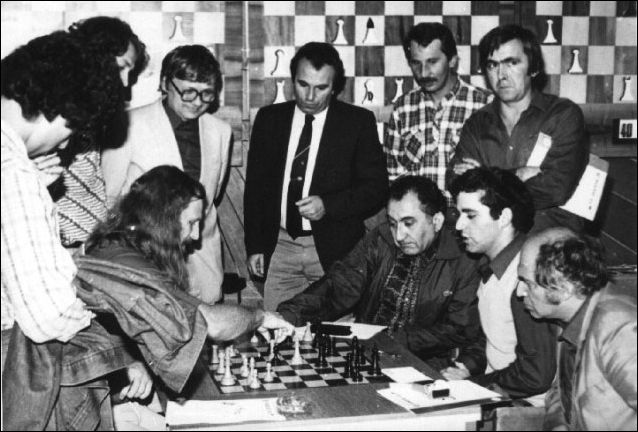 Some stars of Niksic 1983 – Petrosian, Kasparov and Tal sitting on the right | Photo: Sah-mat-lista blog

She was the first Yugoslav woman international referee and in her later years, after stopping playing chess, in addition to the organization, she also refereed many important chess events.

In 1985, she received special recognition from the Georgian Soviet Federation for her contribution to the development of chess in the world.

On the occasion of his 80th birthday and on the occasion of the celebration of Serbian State Day on February 15, the President of Serbia, Tomislav Nikolić, decorated Milunka with the Order of the Third Degree. Sretenji, for special merits and for achieving extraordinary results in chess. 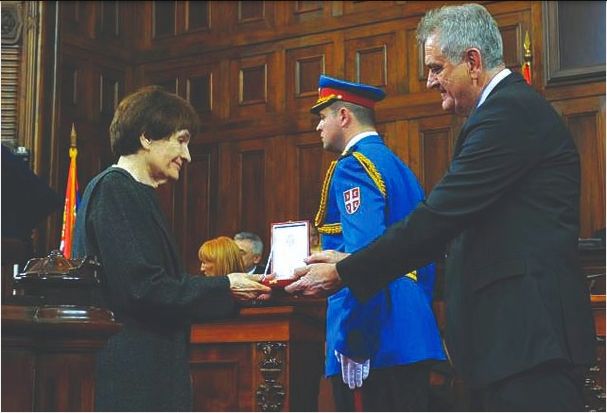 Milunka receives the Order of the Third Degree for her chess exploits | Photo: Balkan Chess

I had the privilege of knowing Milunka personally and attending her chess lessons for a while. In Paris, where I spent time as a student, I played in the club of another Yugoslav chess master, Milinka Merlini (1929, Tuckovo, Yugoslavia – 1996 Paris), who was a friend close to Milunka.

As I returned to Yugoslavia to take up my teaching post at the University of Zagreb, she recommended me to Milunka who taught chess in a club in central Zagreb, and she accepted me as a student. I remember her as a rather severe but passionate teacher who, every time some of us would do a particularly good gesture, exclaimed with joy: it is a colossal gesture! My academic homework overwhelmed me and I did not take advantage of this opportunity for very long, but I was fortunate to have known, even briefly, an extraordinary person for whom chess was, in his words, “a symbiosis of all the arts’.

One thing remains shrouded in mystery to me: I don’t know why Milunka lived in Zagreb at that time, around 1981-82. I haven’t come across any mention throughout my extensive research. My inquiries to both the Serbian and Croatian chess federations did not provide a satisfactory response. 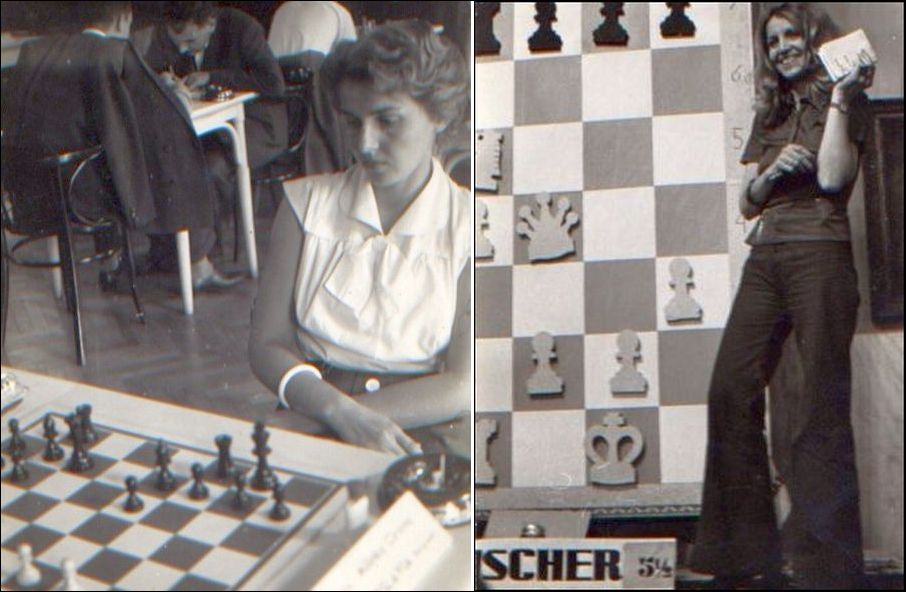 Milinka Merlini, on the left while still in Yugoslavia; on the right, in Paris commenting on the 1972 Fischer – Spassky match | Photo: French Chess Heritage

Unusual jobs you can apply for, from tea taster to professional sleeper